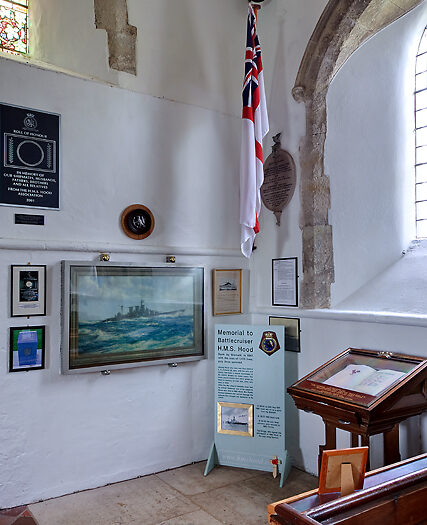 Sometimes our experience of military destinations can be very small-scale and intimate indeed.  I like to imagine myself stumbling across this memorial to the men of HMS Hood at St. John’s church in Boldre, Hampshire, England.  What a privilege and honor that would be!

The caption by Mike Searle on Geograph reads:

A quiet corner set aside within the church dedicated as a memorial to the 1,416 officers and men who died on the battlecruiser HMS Hood. She was engaged by the German battleship Bismarck off the south west corner of Iceland on 23 May 1941, and was crippled by a mortal salvo of fire from the German ship, and blew up, sinking within two minutes. There were only three survivors from the entire ship’s company; among the casualties was Vice Admiral L. E. Holland CB, who along with his family were regular worshippers at St John’s, Boldre.