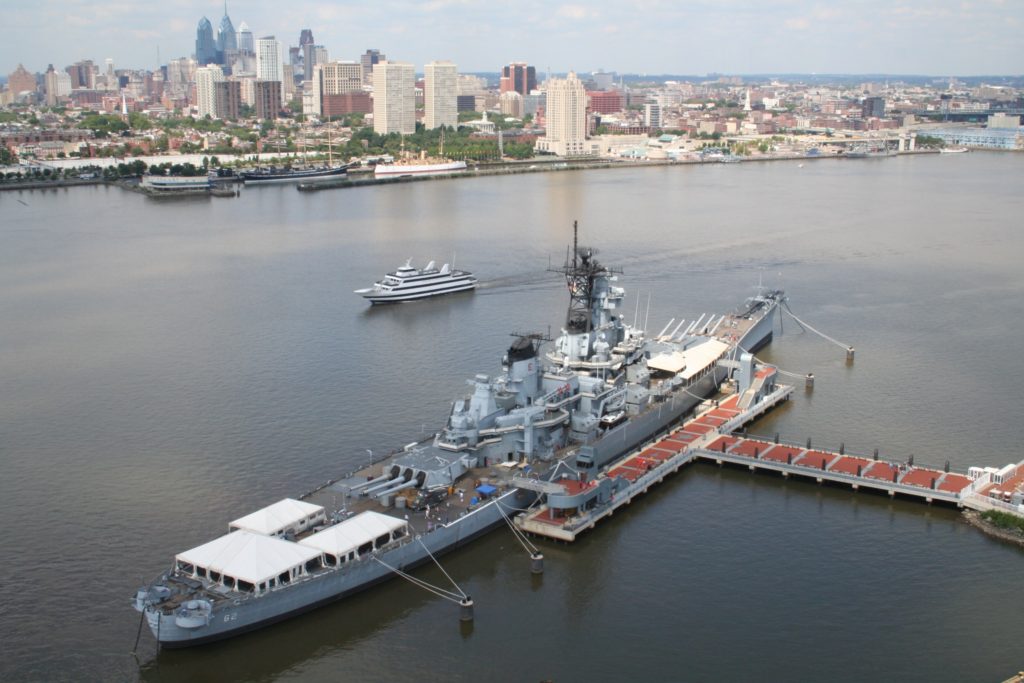 Name almost any island in the Pacific Campaign and the battleship New Jersey was there.  The Marshall Islands. Truk. New Guinea. The  Philippines. Okinawa. Iwo Jima.  Now fast forward to Korea (she was there), and then fast forward again to bombing of the Marine Corps Barracks in Lebanon (she fired her 16-inch guns on Syrian antiaircraft guns). Are you getting the picture? No battleship has more decorations than the New Jersey. In a word, she was a warrior, and now you can walk her decks.

Anchored on the Camden, New Jersey side of the Delaware River (just across from Philadelphia), the New Jersey towers as an icon of sheer power. Painted battleship grey, she  is 887-feet long, 108-feet wide and 11-stories tall from the waterline to mast. Her interior compartments have been fully restored and she is fully operational (plumbing, heating, food). There are video screens and exhibits throughout each telling one aspect or more of her storied history or explaining the workings of a ship at sea.  A real treat is to step inside a turret.  An engineering feat of impossible size and explosive power, a  16-inch gun sits a 5-story iron structure that weighs 239,000 pound and requires a crew of 80 sailors to fire. Six 110-pound bags of gunpowder are fed into the breeches behind a 2,700-pound projectile that can be shot 20-plus miles with near pinpoint accuracy.   A 90-minute self-guided tour takes you through the ship including a stop inside the gun deck of Turret #3.