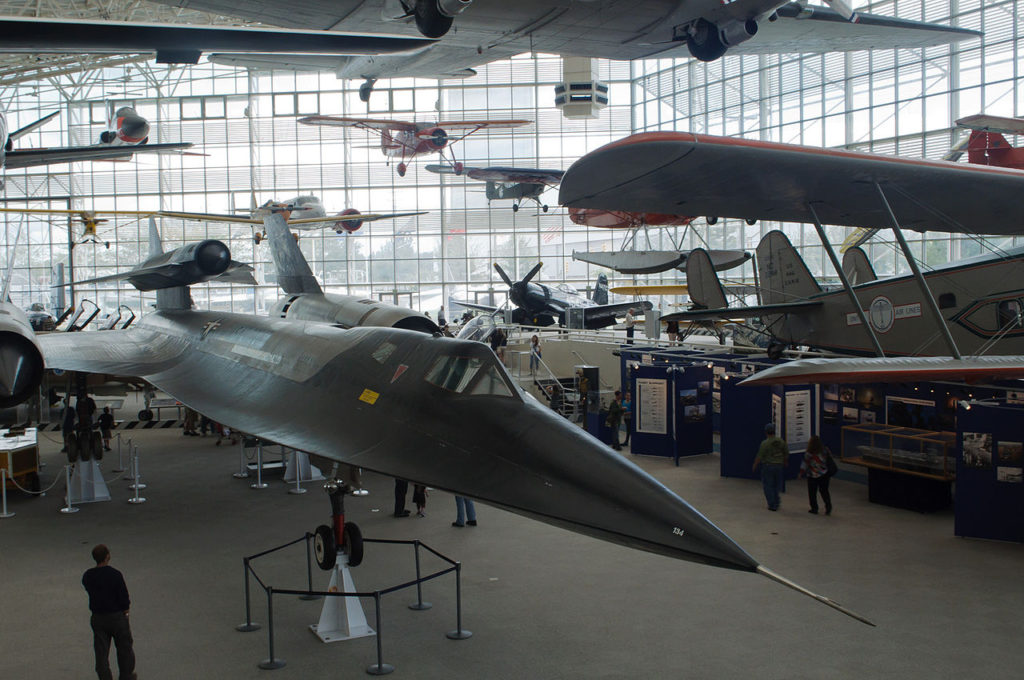 With Boeing next door, the Museum of Flight understandably celebrates civilian aviation – but it doesn’t ignore the military side, either. At the Museum of Flight, you’ll be immersed in both worlds as you navigate an inspiring glass-and-steel complex that spreads across two campuses and features 175 airplanes.

You’ll start your visit in the East Campus in what is no doubt the granddaddy of all aviation display areas. From the entrance, go to your left into the Great Gallery and be amazed by its 3 million cubic feet of space and some 50 military and civilian aircraft. As you walk in you’ll be surrounded by civilian sport planes, experimental aircraft, aircraft from the early years of aviation and, in the back, some military types. Go to your left and find the F-4 Phantom and a Mig-21 placed next to each other, adversaries over Vietnam but friends here in retirement. Elsewhere, a civilian DC-3 hangs over the M-21. The M-21 is a CIA variant of the SR-71/A-12 spy plane was made to carry the D-21 supersonic drone at the SR-71s hyper-sonic speeds (three times the speed of sound). That made the M-21 the mother ship of all mother ships but the D-21 proved to be tricky and on the fourth test it crashed into the M-21 after separation destroying both planes. The project was abandoned and this is the only surviving model. (It’s on the main display floor seen paired with the drone and is one of those fabulous one-of-a-kinds that make visits to museums unexpected treats.)

Next, cross back through the museum’s main entrance for the Personal Courage Wing and enter this beautifully lit pavilion. Here you’ll find 28 superbly restored WWI and WWII warbirds each surrounded by curving murals and period dioramas that hit the spot. Both galleries contain aircraft flown by all of the adversaries. For instance, the World War II Gallery has a German Messerschmitt Bf-109, a Japanese Nakajima Ki-43 Oscar, a British Spitfire and five American classic, a P-47 Thunderbolt, a P-51 Mustang, a FM-2 Wildcat, a FG-1 Corsair, and a P-38 Lightning. Placards tell a story abut each.

From here walk the Memorial Bridge over to the Aviation Pavilion in the West Campus. In a sense, this is history of the Boeing Company. Here you will find the first Boeing B-727 trijet made, the first Boeing 737, and the first Boeing 747. Next to them is the latest from Boeing, a 787 Dreamliner. Against the windows is a sleek Concorde supersonic passenger jet

The military aircraft here celebrate Boeings contributions, too. There is a Boeing B-17 Flying Fortress, a Boeing B-29 Superfortress, and a Boeing B-47 Stratojet nuclear bomber. (The ever-so-familiar Boing B-52 will soon be installed in a special Vietnam exhibit. Check the museum’s web site for details.) Around the edges are fighter jets including an AV-8C Harrier, four of the Grumman jets –an F9-F Cougar, an A-6 Intruder, an EA-6B Prowler and a F-14 Tomcat,

As hard as it is to imagine, there’s even more to see here including a Space Gallery and the Red Barn, the “garage” where Boeing was born. But here’s the important point. Across the board the restoration work is nothing short of perfect. The period finishes and markings are beautifully done, many aircraft are displayed with drop tanks or appropriate weapons stores, and the settings are colorful and informative. The flight simulators are top notch, the movies in the theater zoom you across time and space, and the glass-and-steel exhibit halls are beautiful. Give yourself a few hours to see it all, and take a break in the Wings Café. And, as always, the gift shop is stocked with things you don’t see in the local big box store so if you see it here, buy it here.