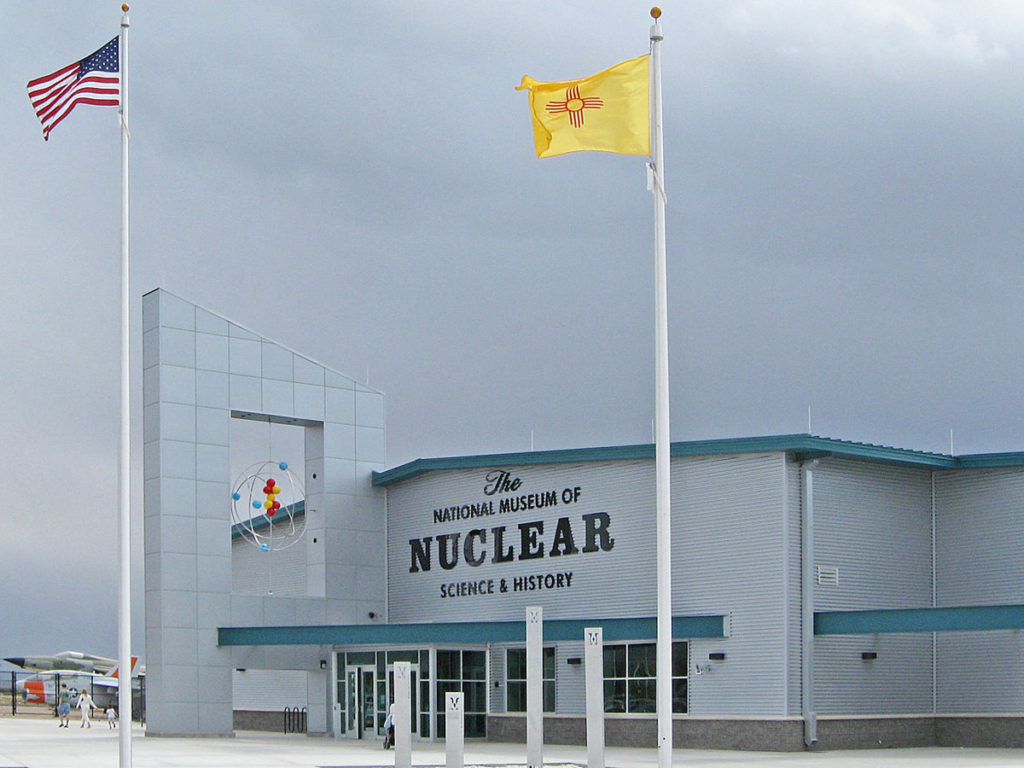 The entrance to the National Museum of Nuclear Science. Don’t miss the impressive outdoor air park.

The National Museum of Nuclear Science has a comprehensive display of nuclear weapons most of which are exhibited in the  museum’s 9-acre outdoor display called Heritage Park. Although a bit scruffy in places (with dust and weeds), you can see the progression of nuclear bombers from the post-war B-29,  to the B-47, the first jet bomber,  to today’s B-52. Notice the white painting on the under belly of the B-52. This reflective paint was design to help prevent the bomber from bursting into flames by warding off  the thermal pulse when a nuclear bomb detonated. Notice, too,  the array of the fighter jets.  At one  time or another all of these jets were on strip alert  with nuclear air-to-air missiles and tactical bombs at the ready (fighter jets could carry the B43 atomic bomb).

Next are the ICBMs and cruise missiles. Here you can walk around the Titan II, the Minuteman, Polaris, and the MX missile,  or study the Hound Dog and Snark nuclear cruise missiles. Like the bombers and fighters, all of these missiles carried nuclear warheads.

Two more artifacts deserve your time. The sail of the USS James F. Polk symbolizes the part played by submarines in the triad of nuclear deterrence (nuclear bombers, nuclear ICBMs, and  submarine launched nuclear  missiles – SLBMs). The Polk was a fleet ballistic missile carrier that had 16 Polaris (later Poseidon) SLBMs inside her hull. And you can’t miss Atomic Annie, one of the  few remaining examples of the huge, 280mm cannon built to nuclearize the US Army, Annie was disassembled and put on a train and sent to the Nevada Test Site where she successfully fired a live nuclear artillery shell. The small a-bomb inside successfully detonated.

The museum itself is  smallish but has some fascinating exhibits some of which are terribly poignant.  The display on “criticality” is a reminder of the terrible risks involved when  exploring the atom.  A Los Alamos scientists dropped a screwdriver into a plutonium pile which pushed a block of beryllium into a sphere creating a reaction that bathed him in radiation. He died some days later – slowly — from radiation exposure.