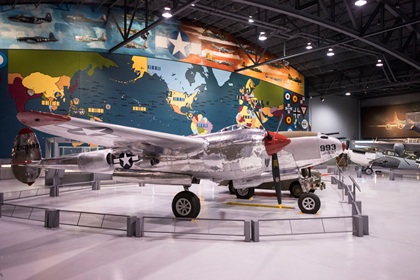 Military pilots and warbirders alike find a special place in their hearts for this grass roots organization that started out as a ragtag group of homebuilders of airplanes and morphed into one of the largest and most respected pilot-oriented organizations in Americas. Although by definition a civilian group, the Experimental Aircraft Association embraces warbirds and military aircraft and at their annual fly-ins and air show they draw hundreds of thousands to see the latest bombers, fighters and transports as well as WWII and Vietnam-era aircraft lovingly restored.

The key military component of the newly renamed Aviation Museum (formerly the Airventure Museum) is the  Eagle Hanger.  A colorful, 120-foot wall mural depicts the continents on our planet to visually shows us that World War II was indeed a world war. With that as a backdrop, here you will find a small but pristine collection of warbirds anchored by the rare WWII-era P-38 Lightning. The twin-tailed, twin engine Lightning was fast and agile and could generally out maneuvered the Japanese fighters  it encountered in the Pacific Theater so much so that our top aces racked up 30 and 40 aerial victories (Richard Bong held the top spot at 40 planes confirmed).  Other aircraft in the hanger include the perennial favorites– the P-51 Mustang, a B-25 Mitchell, a F4-U Corsair, a British Mosquito,  a Bf-109 Messerschmitt made in Spain, and more.

Two more things to note. The Timeless Voices of Aviation is a fascinating collection of oral histories that cut across all aspects of flight but most vividly contains first person accounts of combat  as told by  military pilots and aircrews. True, too, for the art and photography collections held by the EAA. Here again, mixed into the pictures and paintings of civilian aviation are many images that visualize war scenes from America’s conflicts.