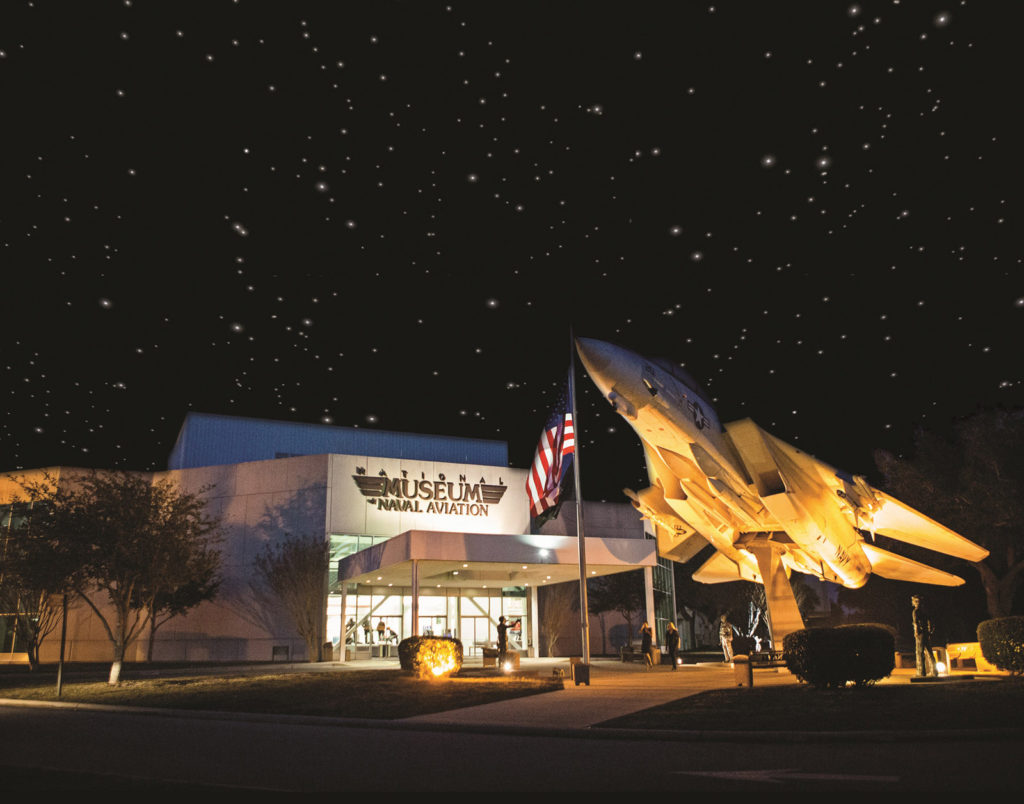 Naval aviation comes to life in all its glory here on the panhandle of Florida.

An F-14 soaring skyward tells you’ve arrived at the National Naval Aviation Museum at NAS Pensacola. In a nutshell, this is the history of naval aviation in all its afterburning glory beginning with tentative pilots pioneering flight on aircraft carriers all the way up to rocket boosters blasting Navy astronauts into space. Thirty-seven acres and 350,000 square feet of exhibit space display more than 150 aircraft and thousands of artifacts. There is a Coast Guard exhibit, a Marine One display (the Presidential helicopter), a Korean war display, a Vietnam POW exhibit, cockpits to sit in, atomic bombs to be amazed by (and yes, the Navy carried A-bombs, too), cutaways to view, aircraft carrier exhibits, and on and on. Plus those airplanes – 150 of them including a formation of Blue Angels in the lobby-atrium. To spend less than a full day here would be a mistake.

If you can arrange your schedule just so, try to visit the museum on Tuesday or Wednesday mornings. That sound you’ll hear will be the afterburners of the Blue Angels as the run through a 55-minute practice of their performance. There are 1,000 seats outside for those who want to watch (NAS Pensacola is home to the Blues; the pilots will later come over to sign autographs).

If you miss the run-through, go see the 4-D Blue Angels Experience in Hanger Bay One. If not, try the flight simulators and “take off” from a carrier deck or fly in formations like the Blue Angels do. Of course, there is the Giant Screen Theater which usually has three movies rotating throughout the day (it seats 325 people). The Cubi Bar Café serves food and drinks in an authentic officers club setting from the Philippines, and the museum gift shop is stocked with one-of-a-kinds. And if you see it here, buy it here; you won’t find these things in your local big box store.