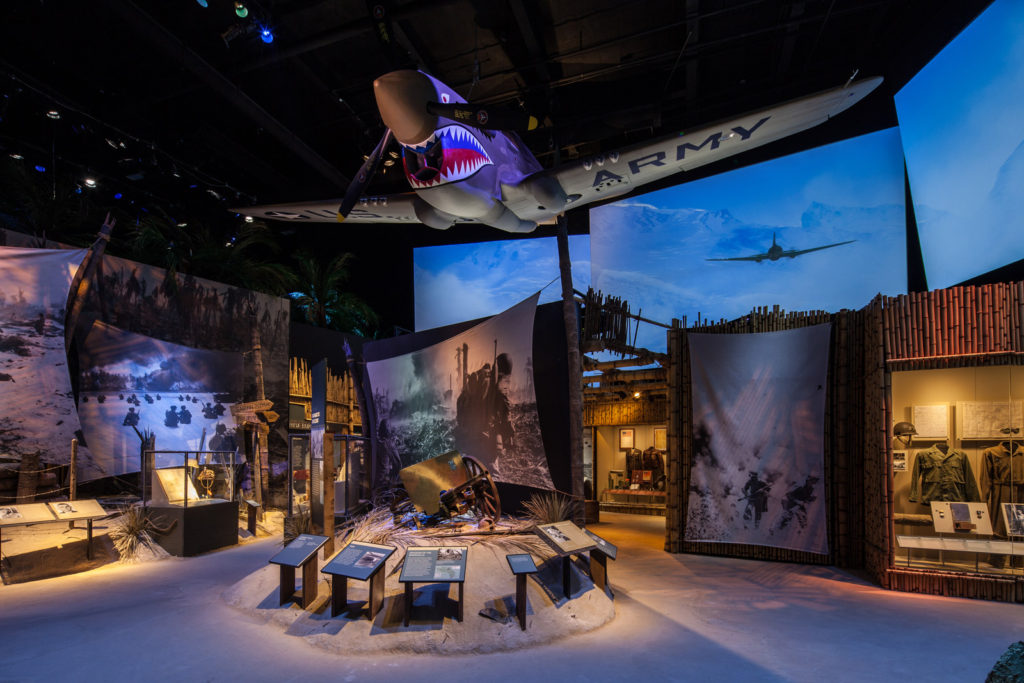 The World War II Museum grows and grows with new exhibits – and pavilions – that tell the full story of World War II.

They say a good story grabs you by the gut and pulls you forward through space and time. That certainly applies here. The National World War II Museum is story telling of the highest order.

This six-acre campus in the center of New Orleans consists of five separate buildings each crammed with artifacts arrayed to communicate a theme, a story, a battle. The Louisiana Memorial Pavilion is a good starting point. Here you’ll find an excellent overview of World War II starting with life on the home front and the conversion of our industry to a war footing (“The Arsenal of Democracy” exhibit), through Pearl Harbor, and on to D-Day. Each topic is explained using detailed exhibits, large scale graphics, and objects big and small. Artifacts include 1940 newspapers and period clothing, and they are all real.

Next visit the Campaigns of Courage Pavilion. The Road to Tokyo: The Pacific Theater Galleries uses large scale dioramas to stage battle landscapes filled with artifacts, mannequins, foliage, lighting, and audio effects appropriate to the combat depicted. In the main, these are walk-through exhibits presented in chronological order starting with the attack on Pearl Harbor and continuing through the Coral Sea, Midway, Guadalcanal and every island fought in the Pacific until the surrender on the USS Missouri. Each gallery combines photographs and graphics with interactive story telling that includes the facts and figures that make history come to life.

The displays follow this theme in the Road to Berlin: The European Theater Galleries. Once again, you progress chronologically starting with the invasion of North Africa, then the North African campaign itself, followed by the invasion of Sicily, mainland Italy, the dramatic story of the bloody air war against Germany, followed by the carnage of D-Day itself. From D-Day, the war progresses inland toward Germany where we encounter a heart-breaking diorama depicting the frigid cold of the Battle of the Bulge, then across Germany and on to Berlin. Every stop is personalized with soldier stories and personal artifacts. Every gallery is filled with large and small artifacts, maps, photos, foliage and landscaping easily transporting you back in time.

The Freedom Pavilion is crisscrossed by the legendary warbirds of WWII aircraft in flight — the P-51 Mustang, the B-17 Flying Fortress heavy bomber, the B-24 Liberator heavy bomber, the B-25 Mitchell medium bomber, the F4-U Corsair Navy fighter, and the TBM Avenger torpedo bomber, to name a few. This side of the campus will immerse you in the physical world of sailors, airmen and soldiers through ships, planes, and howitzers including scale models.

The Kushner Restoration Pavilion is where restoration works is almost always underway — and where you press your face to the glass and watch. An ongoing mission of the museum is to grow its collections so be sure to leave time for a stop here. And be sure to watch the movie in the Solomon Theater. This is the one narrated and produced by Tom Hanks. As we said, this destination is story telling of the highest order. Lines form early so plan ahead.

This is a large museum so pace yourself. You could easily spend two days here, and many do. For a rest, try the American Sector Restaurant + Bar, or the Jeri Sims Soda Shop.