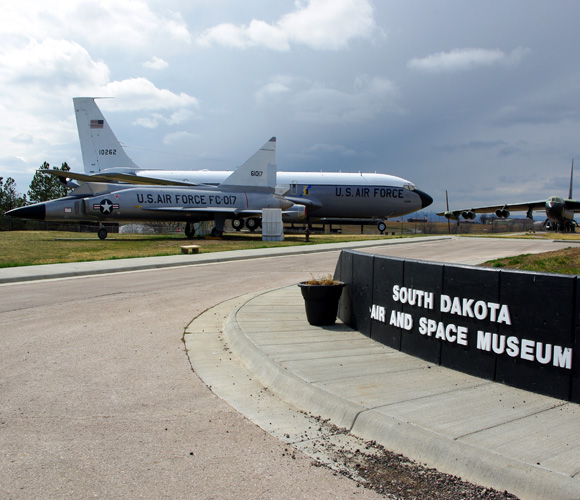 The entrance to the South Dakota Air & Space Museum

The South Dakota Air & Space Museum is inextricably linked to its neighbor,  Ellsworth Air Force Base. Ellsworth  Air Force Base began as a WWII training base that stamped  out B-17 pilots and navigators with production-line like regularity. When  the war came to an end, it became a bomber base with a wing of  B-36 intercontinental bomber and then a  wing of supersonic B-1B Lancers.  Ellsworth eventually entered the missile age with a wing of Titan ICBMs, followed by Minuteman missiles, followed by the more advanced  Minuteman IIs.

The South Dakota Air & Space Museum tells that story, and more.  A series of crème-colored hangers form the main museum with a  B-1B bomber and a Minuteman II  missile there to greet you as you arrive. Inside, backlit displays are filled with histories and tableaus. You’ll will find aircraft cockpits, crew stations, and artifacts that cover more than 100 years of aviation history. There is a miniature scale model of the WWII raid on Ploesti, a command console for the missiles, and a F-104 cockpit trainer, to name some of the things to see.

Next walk the outdoor airpark. The incredibly beautiful Black Hills Mountains provide a stunning backdrop to a display of more than 30 well-maintained aircraft, including a WWII-era B-29, a Vietnam-era B-52, a Huey, an FB-111 Aardvark, a EC-135, an F-100 , an F-102, and a F-105, and more. The aircraft are painted in period colors and with period markings.

Interestingly, the museum offers a daily bus tour around Ellsworth Air Force Base and stops at the old Minuteman II training silo. You’ll go down 30 feet and look through portholes to see the missile and have the entire operation explained to you.  During the tour,  you’ll get a windshield view of a strategic bomber base and pass several points of interest including the security forces guard dogs and the flight line (if it’s open). And don’t be surprised if you see a B-1 bomber taking off or landing. This is an active duty base.