The National Museum of the Pacific War, Fredericksburg, Texas 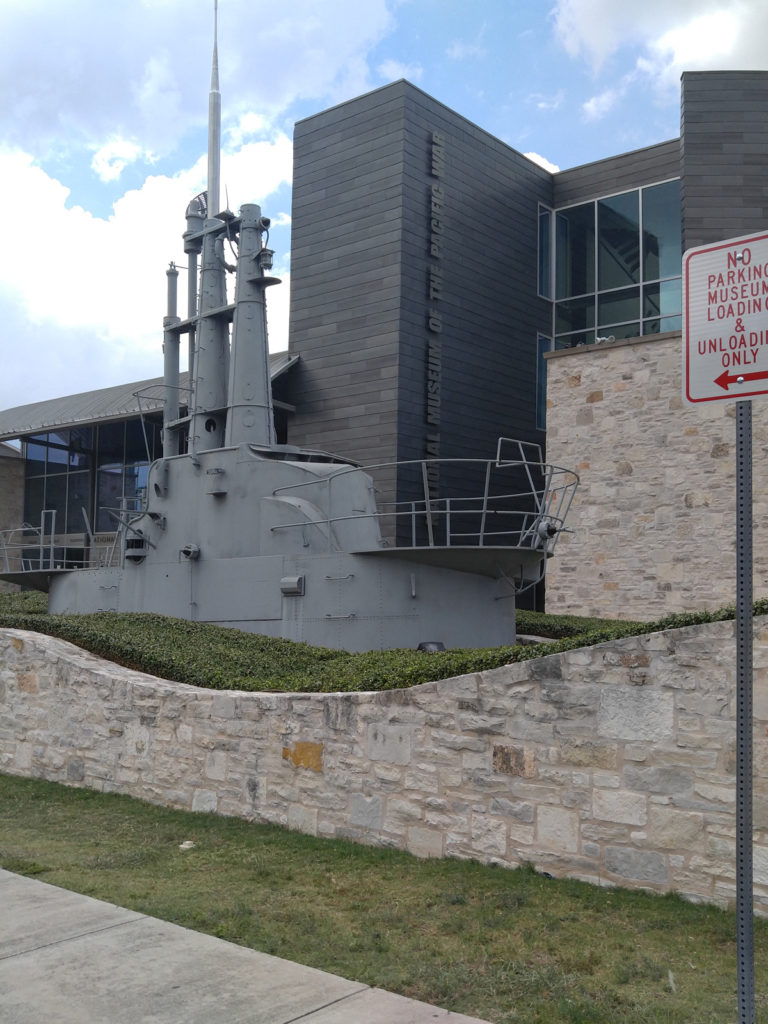 The undulating stone wall in front of the museum suggests a wave in the ocean. Note the submarine behind it.

After winding your way through the beautiful Hill Country of Texas you begin to wonder — what on Earth is a museum dedicated to the war in the Pacific Ocean doing in a dusty, land locked town miles from the nearest seas? It’s a beautiful place no doubt — Texas wineries abound and the scenery is ruggedly handsome. It’s also a town filled with wonderful people and conveniently located equidistance from Austin and San Antonio. But that’s not the answer. As it happens, Fredericksburg, Texas is the birthplace of U.S. Navy Fleet Admiral Chester W. Nimitz, our World War II Commander-in-Chief of the Pacific Fleet. Nimitz is from this charmingly small town. Thus, this excellent museum.

First, lets go back in time. The Pacific campaign was a lengthy, distant, island-hopping campaign across an ocean three times the size of the Atlantic Ocean. There was combat in Guadalcanal on one side of the Pacific, Wake Island on another, and more combat out to the Philippines. Bloody battles were fought in places with names that were foreign to the average American and in conditions alien to our soldiers. In the Pacific, heat, poisonous snakes, diseases, and bullets all claimed lives.

There are three distinct “campuses” on the six acres that make up this excellent destination. The first is the main museum and the crown jewel called the George H.W. Bush Gallery. On the street-side, the Bush Gallery greets you with a stone wall that forms an undulating wave behind which a Navy submarine literally rises out of the ground (Admiral Nimitz was first and foremost a submariner). Behind the submarine is the museum itself. After paying your admission fee, you will follow a twisting, turning path through a series of multimedia exhibits that take you from the seeds of war in the Pacific, to the unconditional surrender of Japan. There is a display or diorama explaining all of the battles on each of the islands using a combination of mannequins, large scale artifacts like tanks or artillery pieces, foliage, special lighting, video displays, and other visual graphics. Along the way you will pass video walls, use touch screens, listen to your audio wand, and see hundreds of artifacts including Japanese and American warplanes, combat artillery pieces, and, incredibly, one of the Japanese mini-subs that was captured in Hawaii.

After touring the Bush Gallery head over to the Pacific Combat Zone. Here you will find an enormous plaza imprinted with a map of the Pacific Ocean connecting the TBM aircraft hanger, the PT boat base, and the one-of-a-kind 2.5 acre outdoor amphitheater. Visit the TBM hanger first and see a restored torpedo bomber like the one that President Bush flew. Then go to the PT boat base to see PT-309 being readied for a night patrol in the Pacific.
Finally, there is Nimitz Museum itself which is inside the old Nimitz Hotel. The Nimitz Museum tells the story of Nimitz family and how a young boy from this land-locked part of Texas grew up to become the Commander-in-Chief of the Pacific forces. This Nimitz Hotel has been beautifully restored and has exhibits throughout.

You could easily spend the weekend here and many people do. There are plenty of motels and excellent restaurants in town and so very much to enjoy in the area. But first and foremost, let it sink in. Linger and explore and let this destination remind you of the great sacrifice our men made to end this war.

The reenactments in the Pacific Combat Theater are performed twice monthly, March through November. Tickets are required and dates are posted on their web site.

We had a wonderful afternoon reacquainting ourselves with this gem of a destination. The grounds were perfectly maintained, the displays were polished and the staff fast with their answers. We couldn’t stay the night but there are several hotels in town and wineries nearby making this a A+ weekend getaway. Once again, it gets our Top 20 star!