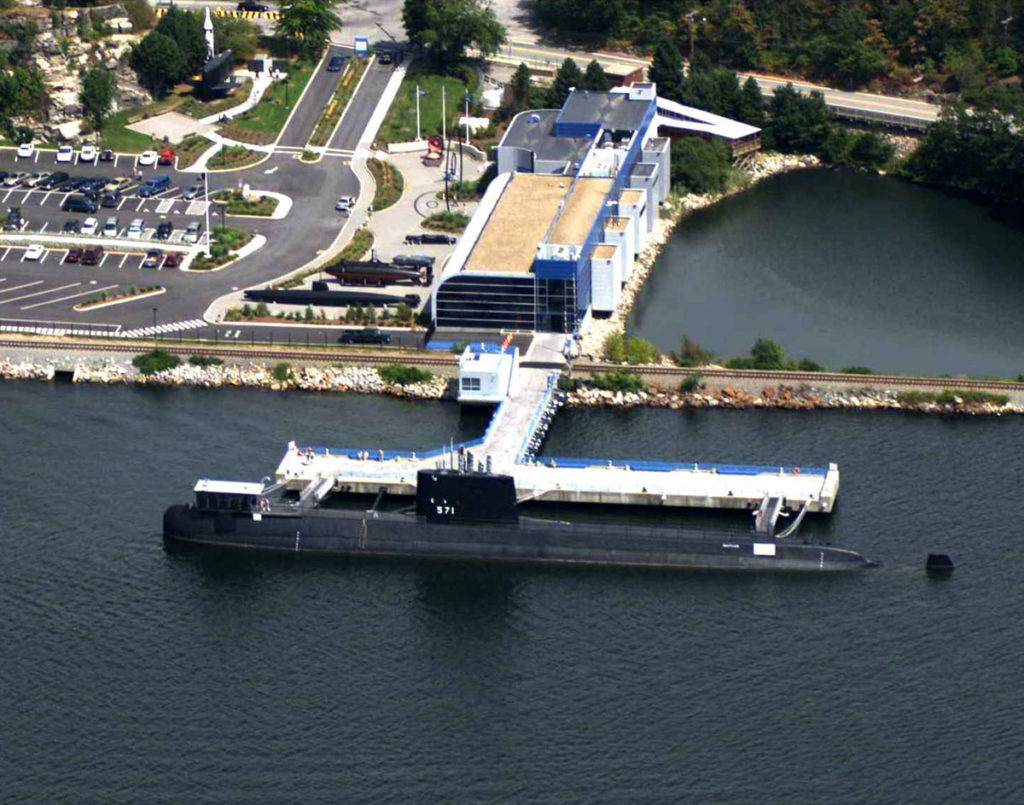 An endlessly fascinating day can be spent in Groton, CT at the Submarine Force Library and Museum. Foreground – USS Nautilus.

There’s nothing quite like the sight of a submarine silently moving up a river. The hull is an ominous black, the water mysteriously ripples in its wake,  it moves serpent-like, half above the water, and half below.  See it when you’re not thinking, and you’ll do a double take – and that’s part of the fun visiting the Submarine Force Museum in Groton, Ct.  Located adjacent to Naval Submarine Base New London, the Sub Force Museum explores and documents the history of our nation’s silent service.  Inside the main building, you’ll find displays and videos that show how submarines evolved from the tiny cramped vessels of old to today’s almost spacious Los Angeles, Ohio and Seawolf class subs. There are three operating periscopes to try plus two mock-ups of a real  submarine attack center, one depicting a WWII-era submarine, the other a more recent Sturgeon class submarine.

The centerpiece here is the USS Nautilus.  As our nation’s  first nuclear powered submarine, the Nautilus ushered in an era when a submarine could traverse enormous stretches of the ocean, pass under the polar ice cap, and slip through the oceans with unheard of stealthyness. Moreover, Nautilus was nuclear deterrence perfected. Nuclear subs like Nautilus were eventually fitted with SLBMs meaning that from the depths they could launch a crippling retaliatory strike that would all but decapitate the Soviet Union.  Using their stealthyness to hide from the Soviets,  they made the thought of a first strike against the United States almost unthinkable. Nautilus was the first step toward that capability.

Start inside the museum and walk through the main hall. Be sure to see the wall with the scale models of our submarines, plus the attack centers, and the weapons our submarines carried including deck guns, mines, and torpedoes. There is a 50-foot  the scale model of the WWII-era Gato class submarine. The cutaway lets you visualize the interior spaces on one of the workhorses of that war.

Next,  take the tour of Nautilus and her interior compartments. You  will receive an audio wand to explain things as you walk through her torpedo room, the wardroom, the Attack Center, the Control Room, and the crew’s mess. Next , visit the other submarines here including  of the Japanese WWII mini-subs and our own X-1 mini-sub which proved to be inadequate in the role of harbor defense.

Note the adjacent Naval Submarine Base New London. More than 9,500 sailors and support people are based here. They have 11 submarine piers and some 15 nuclear submarines home ported  here, plus all of the support facilities that go with that.  And as you drive long the Thames, watch for one coming or going. There’s nothing like it.