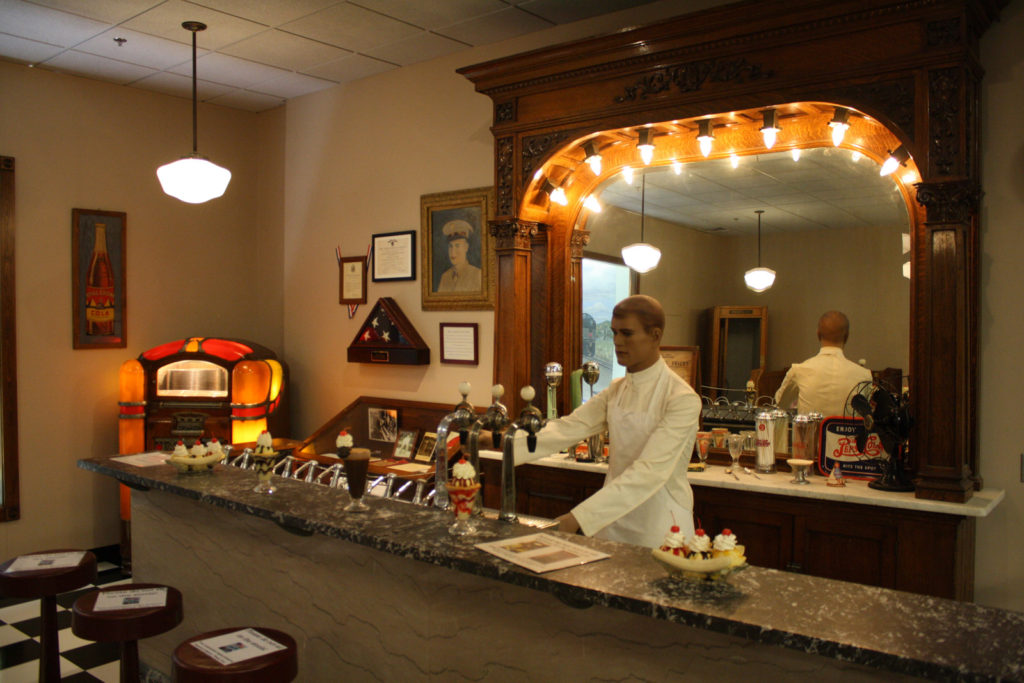 A soda fountain is but one of the many homefront exhibits at this trip down memory lane.

You know you’ve arrived when you drive up to the Wright Museum. A Sherman tank busting through a brick wall tells you that. Voted the Best 20th Century History Museum in New England, the Wright Museum differs from other military museums in one fascinating regard – rather than a museum about WWII per se, it is a museum about the home front and how Main Street USA was affected by WWII. Yes, they have the heavy stuff here — tanks and jeeps and APCs and rifles and even a mocked-up barracks — but what makes this a must-see destination are the glimpses of Main Street USA presented in the context of a world war. The Home Front Gallery has a full scale 1940s living room complete with mom at the piano over which is a picture of their son in a sailor’s uniform. Next to that is a diorama depicting an American kitchen with a mom in a head dress as she feeds a reluctant baby in a high chair. Next a dentist’s office (look at those tools!), then a gas station, then a full scale soda fountain with a soda jerk in period clothes. Everything you see in all of the dioramas is absolutely authentic down to the salt and pepper shakers and the Coca Cola signs in the background. Here and there you’ll find a period washing machine, some 1940’s bicycles, and all sorts of posters, newspapers, and magazines from the era.

From the Home Front Gallery walk through the Time Tunnel to the Military Gallery. Here you’ll discover an exceptionally well maintained collection of drivable vehicles that include a World War II tank, halftracks, a jeep, an ambulance, and other wheeled vehicles. One thing to note – the Pershing tank owned by the museum is the only remaining tank from the ever-so-timely capture of the bridge over the Rhine River at Remagen.

Founded by David Wright, an avid collector of armored vehicles and a former Marine, the Wright shows us that war has never been confined to the soldiers on the battlefronts. War affects mothers and fathers, brothers and sisters, and that’s why we rate this as a top destination. Take a long look at the period clothing and the dioramas and imagine what it was like to have a son out on some remote island in the Pacific or poised to land on the D-Day beaches. The Wright makes us remember those days and in so doing reminds us to remember our soldiers today, too.