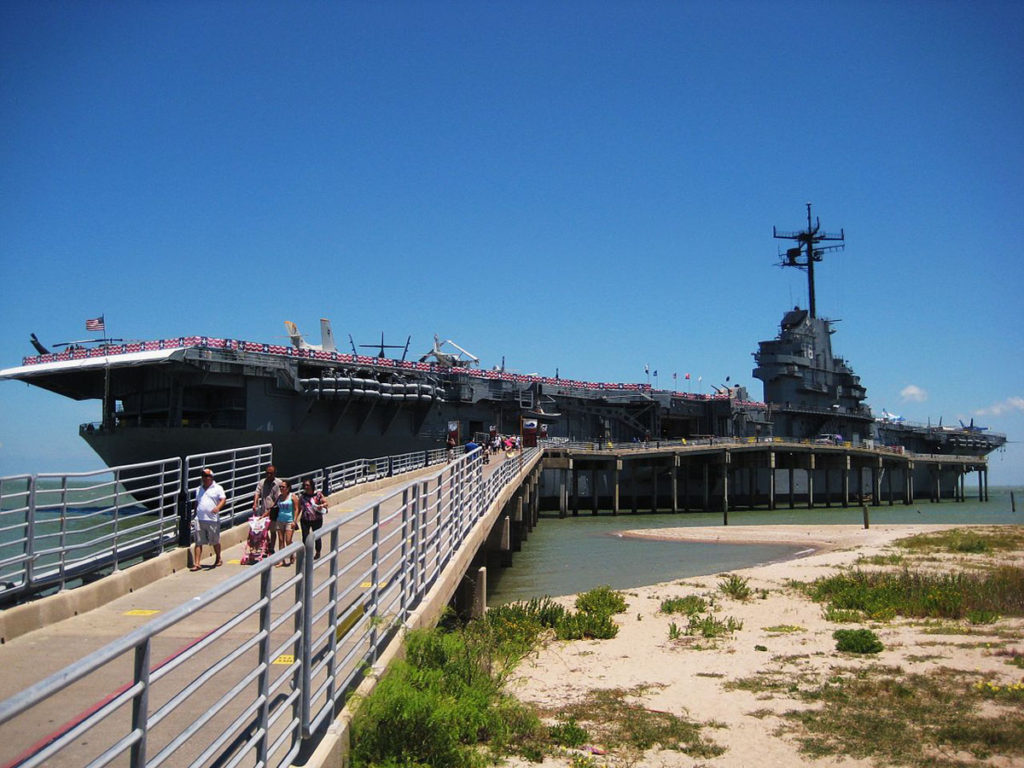 The ramp up to the aircraft carrier USS Lexington

The USS Lexington saw combat during WWII spending 21 months in theater with an impressive record of Japanese planes shot down, enemy ships sunk, and countless days making sure our soldiers and marines got ashore.  She’s an angled-deck carrier today but during the war she was a straight deck carrier, which was something else. During your visit, stand  on the fantail try to imagine what it was like to be an exhausted, 28-year old Navy fighter pilot coming in from a combat mission bouncing around in a F6F Hellcat looking down at that tiny deck and seeing a wall of parked airplanes at the end, hoping — believing – that the arresting cables would stop you before you plowed into them (and, yes,  some did crash that way).  That’s a straight deck carrier (she was modified in 1955).

You’ll start your visit in the hanger deck and sees some  of the 20 perfectly maintained aircraft. You’ll find the expected carrier icons like the F-4 Phantom, the A-6 Intruder, the F-14 Tomcat, the F/A-18 Hornet,  and the A-4 Skyhawk but add to that list the F9F Cougar, the F2 Banshee, the A-3 Skywarrior, the A-7 Corsair, and a fun-to-see T-2 Buckeye trainer jet (it’s the trainer many Navy pilots flew back when they first trapped on a carrier).  Walk around the hanger deck and the flight deck and read not just the facts on these planes but their combat histories, too. The decks are open and the ship is welcoming with docents ready to tell you a story or two.

Most of the ship can seen on a self-guided tour but they do have some interesting options. If you love the grit of the interior compartments, try the Hard Hat Tour. There’s a Flight Operations Tour, too,   if that’s more your cup of tea. (Both require an extra fee.)

Either way, when you’re topside,  be sure to look landward and enjoy the   spectacular view of Corpus Christi. The Lexington has received more than 5 million visitors since it opened to the public.